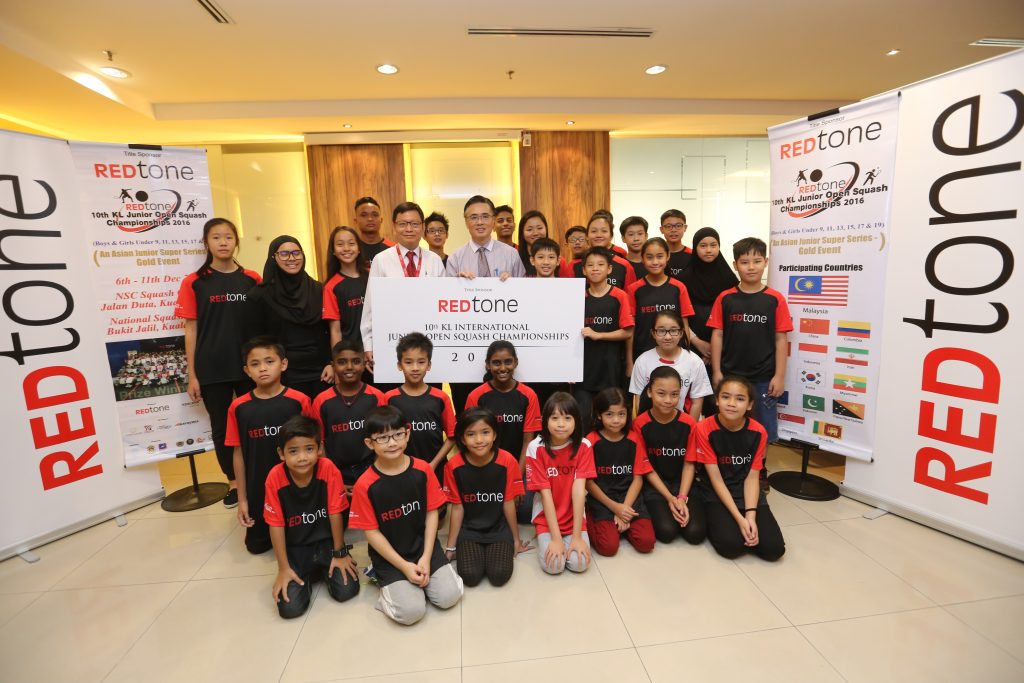 Just concluded the mock cheque presentation and media interviews, to kick-off the REDtone 10th Kuala Lumpur International Junior Open Squash Championships, 2016. We would like to thank all the media who were with us this morning – The Star, RTM, Astor Radio, NST, Tamil Nesan, Sports247 & Tamil Malar.

We are excited and honoured to be the title sponsor of the REDtone 10th Kuala Lumpur International Junior Open Squash Championships. This is the fifth year in a row that REDtone is supporting the tournament and I would like to express my sincere thanks to the Squash Racquets Association of Federal Territory (SRAFT) for once again giving us the opportunity to be part of such an amazing event.

Over the past decade, the event has grown steadily in size, stature and popularity. It is now the biggest junior sporting event in Asia, a distinction it has held since 2013. In term of entries, the tournament has surpassed the 600-entry mark for two consecutive years. I am delighted to hear that this year’s edition has managed to attract 660 players from across the globe.

A total of 15 countries will be represented at the event, namely Singapore, Indonesia, Japan, Hong Kong, China, Pakistan, Sri Lanka, Australia, Colombia, Iran, Papua New Guinea, Myanmar, New Zealand, Korea and Malaysia. In fact, this marks the first time that players from Myanmar and China will be participating in the event.

I would like to congratulate SRAFT on producing a world junior champion, Ng Eain Yow, 18 years after Ong Beng Hee won the title in 1998. Eain Yow is also a three-time British Junior Open Champion, and will be vying for his fourth British Junior Open title in January 2017. Andrea Lee is another Federal Territory player who has been making waves on the international circuit. She recently won her first professional title at the Contrex Squash Challenge Cup 2016 in Hong Kong. Well done, Eain Yow and Andrea! You have both made Kuala Lumpur and Malaysia proud.

As a homegrown Malaysian company, REDtone is pleased to assist SRAFT in nurturing the nation’s next generation of champions. Kudos to the association and everyone involved for their continuous efforts to raise the level of the sport. The REDtone Kuala Lumpur International Junior Open Squash Championships is now well established in Asia and other parts of the world where squash is growing in popularity. I look forward to the event being granted “Platinum Status” next year upon ASF approval.

Last but not least, it gives me great pleasure to warmly welcome all players, parents, coaches and supporters to the tournament. I hope that your experience here will be memorable, and that you will meet new people, make new friends and catch up with old ones. More importantly, have a good time and enjoy the game. Good luck to all players competing in the days ahead!